The Beefy Boys- The Wellington, Hereford

For some reason I've been thinking about Frankie Howerd today, so in best Lurcio style:

If news of The Beefy Boys' imminent arrival in Cardiff doesn't quicken your pulse, gladden your heart and put a spring in your whatnot, you might well consider dialling for an ambulance. Now. To borrow a sporting metaphor recently irrelevant in these parts: this is a Premiership outfit. This is a big deal. In fact, if you have a moment, this is A Big Deal.

Got the all-clear? Good.

I make no secret of my admiration for what The Beefy Boys do and have written about them before- here, in fact.

Word has spread. Since we visited last time they have taken their burgers to The World Food Championships. And now they are about to hit Cardiff for the first time, and the local bar is about to be raised. Because however good the local burger scene is- and it can be very good- The Beefy Boys are something different. Something 'more than'.. Something from unassuming origins which duked it out in the USA. As away fixtures go, that's a toughie. But these are the burgers which went to America and beat them at their own speciality. On their home turf, finishing second overall and with their entry topping the judges'  scores in the final round.

These are 'just' burgers. In the way that Bennet to Williams to Pullin to Dawes to David to Quinnell to Edwards is 'just' a try.  Or Keith Richards' solo in Sympathy is 'just' a nice bit of guitar. Or The Master and Margarita is just a novel. Or The Sistine Chapel is just a nice bit of interior decor....

Alright, so I'm overreaching now. But these are ridiculously good. And they make their debut here today. If any of the 427 different street food organisers in town these days have any sense, they'll be crawling naked over broken glass to get them on their patch.

Last time they were operating from The Barrels' beer garden with a limited menu of burgers alone (we still managed two each, though) so The Wellington on Thursdays gives them a chance to showcase more of what they do, and is as good an excuse as any to chow down.

Little point in coming this far without giving the menu a thorough going-over. So. A starter of a hot dog may be unconventional, but there was work to be done. 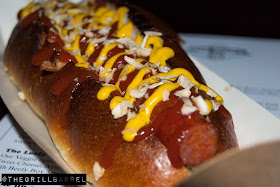 A Trealy Farm charcuterie hot dog, of course, in their signature semi-brioche bread, the mustard and ketchup laced as intricately as something from the pricier end of Agent Provocateur's range (what? they've just emailed me about their range of basques. Titter ye not.) A half-and-half mix of pork and beef, it was a damn fine example of a quality dog and in any other context would be the star in its own right.

Fries were skinny and crisp, one portion with Parmesan and chives and a heady hint of truffle oil, the others laced with baconnaise and 'bacon dust' which should replace sterling as currency if there was any justice in the world. 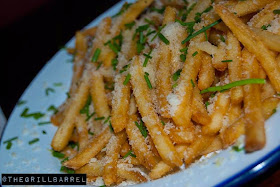 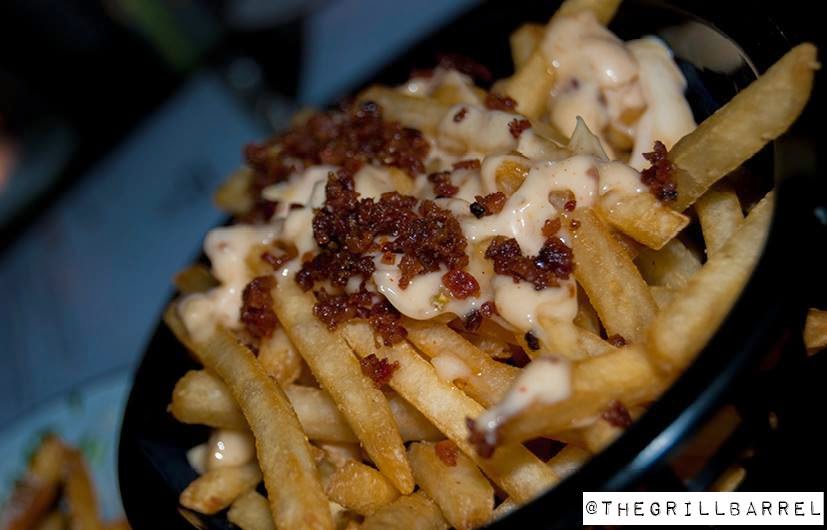 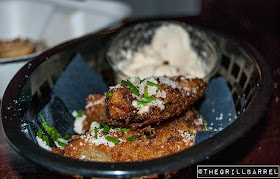 On to the main event, then. All burgers are made to order. Not cooked to order: made to order. Your burger is only formed, by hand, when you make your choice. Think about that and the commitment to freshness over convenience that entails- when some are gulled into believing their burger can feasibly be cooked to order within 45 seconds- and you see the core of what they do.

One Blue Boy, one American Boy.The former tangy with blue cheese, the latter with the classic ketchup and mustard. A third of a pound of aged Hereford beef, bacon, cheeses: the basic core principles of their menu are tweaked to make each choice memorable in their own right, and something distinctively theirs. Served pink, of course: it would be folly to take such care over ingredients and to then cook all the zip out of them. 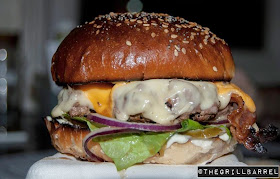 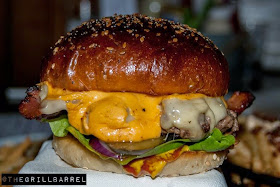 Quite apart from being some of the best-looking burgers I've seen, every element is pitch-perfect. Nothing overcomplicates a Beefy Boy burger, at least not in the three I've had; everything is there for a reason, everything contributes a texture, a flavour, that improves the whole. It's deceptively simple, a sterling case of getting the basics right and keeping fuss down to a minimum, to remarkable effect. 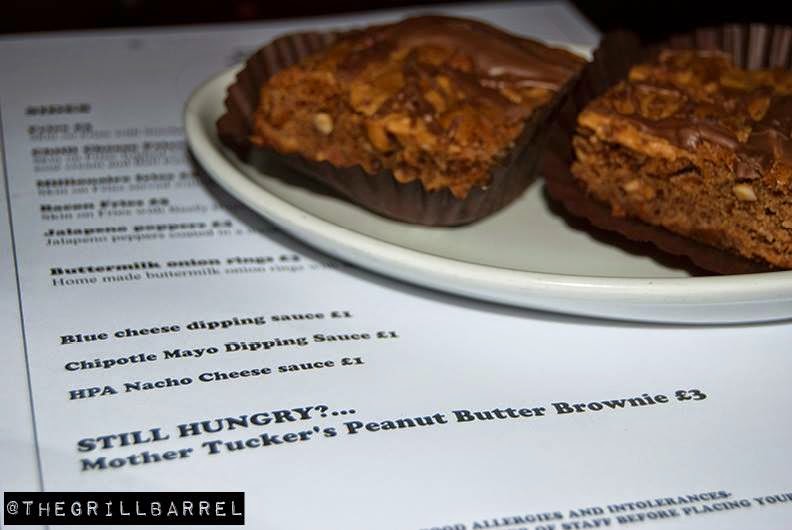 The complimentary peanut butter brownies were a bridge too far for me and were safely packed up for the next morning. My hollow-legged friend had no such scruples: I rest safe in the knowledge it'll all catch up with him soon. Remarkably good they were, too, especially with a mug of strong tea.


You'll have to take my word for it that the pub jukebox was belting out some particularly apposite titles that evening. 'Something Tells Me I'm Into Something Good'. 'Sweets For My Sweet, Sugar For My Honey'. 'Satisfaction'. If you're one of the lucky few who have tickets for Grease tonight, you'll soon know why they seemed the perfect soundtrack to the meal. If you're not, cross anything you can cross that they'll make another appearance soon. Or make the trip to find them on their home turf, while you still can, and try everything you can.

Recommended without reservation. But you already knew that.
The Plate Licked Clean at 16:24
Share