Anyone who is tired of kebabs, is tired of life, as Samuel Johnson (probably) said. Who doesn't love a good kebab? It’s one of those imports which has become absorbed in classically UK style, an end of night staple from Turkey via Germany which always seems like a grand idea at 2am. It's as British as cricket, drizzle and self-inflicted economic damage.

I'm not saying I couldn't truly love someone who had no time for kebabs, but it would certainly raise a flag: a bit like liking Clean Bandit or parsnips perhaps, only less damning.

And that's just the start. Kofte, koobideh, beyti, shish, adana: they may be regional variations on a theme, but when you combine smoke-kissed meats with fresh, pillowy bread and crisp salad with lashings of chilli and cooling garlic and mint, it is hard to beat. It's simple stuff, but hugely appealing when done well, and often my default kind of thing even when sober.

Le Bab, set on the top level of a busy Kingly Court between Carnaby and Regent Streets, is crammed. Despite the place being full of the young, the thin and the beautiful of Friday night Soho , they still let me in. There's a wait- people seem to be enjoying themselves far too much, and a late change to our party size means they can’t fit us in as initially booked- and weend up sat on either side of the front windowsill. It's cosy: as we eat, another queue forms outside.

All the modish boxes are ticked: the Mediterranean- style wall tiles picked out in blue and white, the exposed ceiling ducts, vintage hip hop, the tap water in Sipsmith Gin bottles.

So somewhere taking a run at posh kebabs- Chefs with experience of prestige kitchens, the sort to excite those French tyre chaps, was always going to appeal. Whatever your opinion of the vagaries of the rating system, it's still a jarring juxtaposition, fine dining fripperies meeting kebab. The pitfalls are obvious: the accusation of needless meddling, of gentrifying a high street stalwart.

Their name tips a cheeky wink to their prestige dining heritage (Le Manoir, Le Gavroche) and the first dishes demand attention. This is something...different. 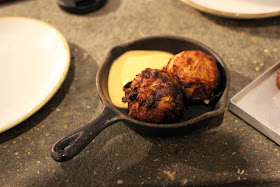 What is billed as a bhaji (£5.50) is a sultry tangle, more meat than onion: it's like no bhaji I have ever met, and quite possibly unrecognisable to most Indians, and it could not be further from the scarlet cricket ball from your Friday night tandoori serves up. It  arrives as some lightly coated, loose-ish medley of shredded lamb and beef (shoulder, shin) and onion.

A revelation, it holds together just long enough to be given a good drubbing with the smoked chilli mayonnaise and shoved into your glistening chops. They are naggingly memorable, even months on.

But good as they are, they are topped- just- by the chicken. I can't remember the last time a 'nugget' beguiled me like this. Bite into the thing- a hot spurt of meaty juices, a kiss of cumin in the coating- and resistance is useless. You'll be seduced too. 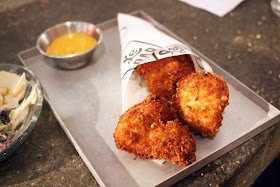 It's about as far from the familiar, cut & paste battered briquette of blandly indeterminate protein as you can find. They demand to be given a good seeing-to with the paprika mayonnaise.  Fingers will be licked. Fingers will be sucked. The whole thing verges on the positively nubile. 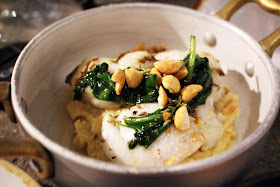 My nephew has cod cheeks (£6.50) - for clarity, this is what he orders from the menu, rather than some bizarre facial mutation- and they are a lovely thing, little velvety nuggets (there's that word again) of fish seared on the grill, with a pleasantly citrussy hummus and a peanut dukkah for yet another cavalcade of textures.

The main event kebabs maintain this impressive level. Mild aniseed tones of pickled fennel are unusual in this kind of thing, the pork crackling or vegetable crisps scattered like little depth charges of contrasting crunch- they clearly understand the importance of how things feel in the mouth here. 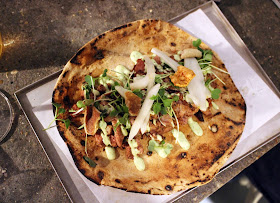 Fries are remarkably good- pre-seasoned but not overly so, and teamed with a pot of sticky fondue with a rarebit level of tickly warmth. The Independent called them 'among the best in London' and while acknowledging I'm only a periodic visitor these days and so not the best person to proffer an informed opinion, it's hard to imagine they're far wrong.  The meat is impeccably done, the 'extras'

You will remember these on those winter's nights, those gloomy evenings when you leave work in darkness and start the long, damp walk back to a cold car; as your breath fogs in the air, you crave something simple and satisfying. 'Remarkably good' is faint praise. 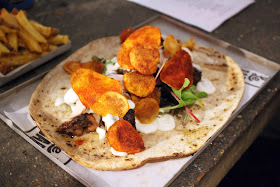 Let's settle on 'extraordinarily good.'  There’s an understanding here, a sense of what makes simple pleasures even better without any unseemly fannying about with the essence of the thing.

What your local Lebanese/Persian/Turkish late night beacon often lacks, however, is that higher-welfare meat, traceability, the attention to detail, the innovative tweaks found here. Mystery Meat or not, it’s the bargain you strike when you make your usual order: don’t ask, don’t tell. Here, it's corn-fed Norfolk Black chicken, and Red Duroc pork from Suffolk cooked for 15 hours. The fact everything is made on site, the attention to provenance and technique is distinctive; it's 'proper restaurant' standards applied to food many might think a little undeserving of such investment.

You may bridle against the perceived gentrification of that trusty end-of-night staple. You may not believe that the kebab needed such a dramatic facelift- it is about as far from elegant tableware and napkin swans as you can get, but it's an intriguing idea and one executed beautifully, with London flair and panache but with a light touch.

Le Bab doesn't take itself too seriously, but feeds you seriously well. What's not to love?